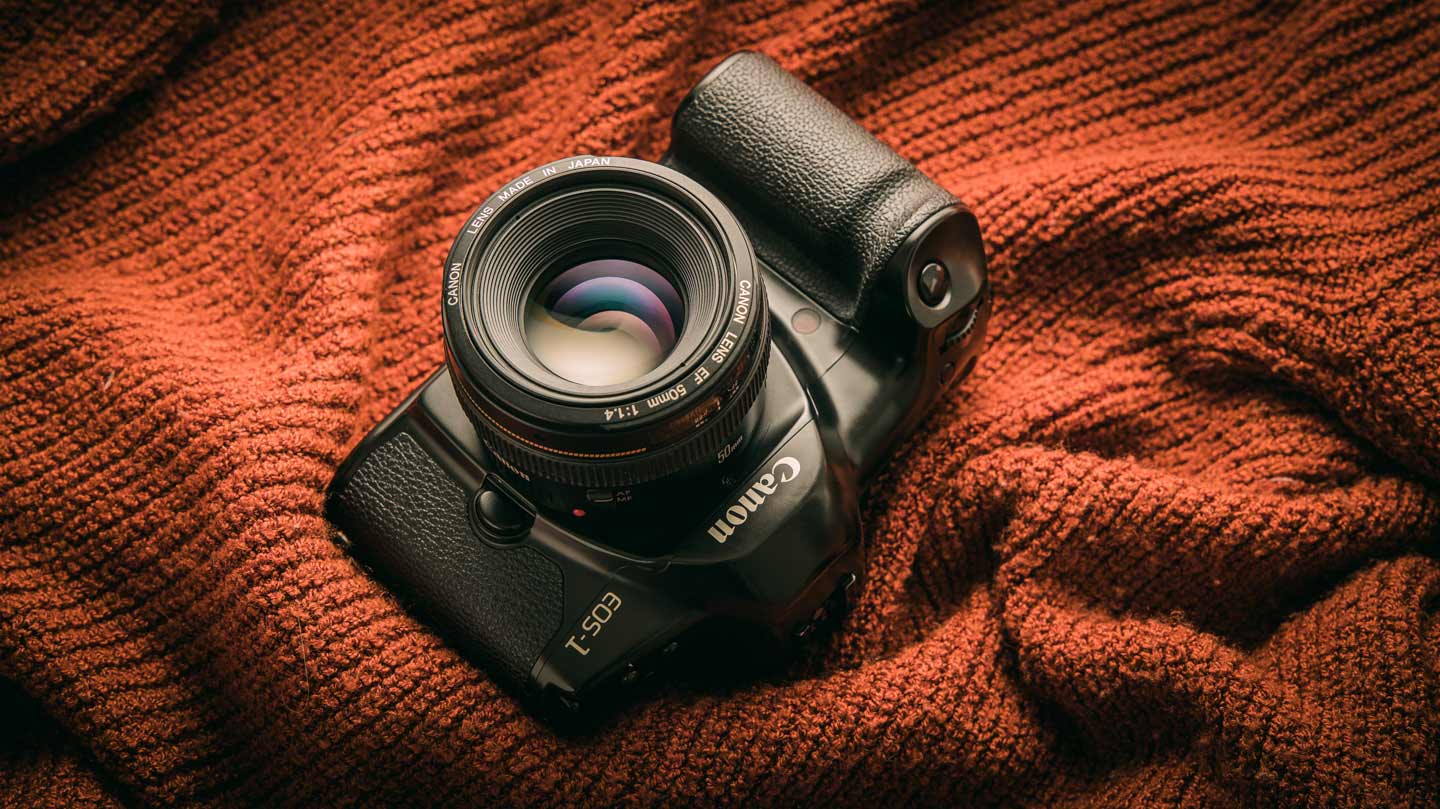 Earlier this year, Canon unveiled its latest Olympic sports camera the Canon EOS-1Dx Mark III. But as you might have guessed from the title of this post, I want to talk about a different camera altogether: the 1Dx’s progenitor, the venerable EOS-1.

Canon officially unveiled its line of electronically-controlled autofocus cameras under the EOS moniker in 1987 with the release of the EOS 650 and 620 SLRs. However, it wasn’t until 1989 that Canon would announce its first professional autofocus body, the EOS-1.

During my short career as a photographer, I’ve had the opportunity to shoot a lot of different cameras both film and digital, and thus far my favorite has to be the EOS-1D Mark IV.

But the 1D Mark IV was pushing a decade old when I was shooting it and at $6,000, a new 1Dx Mark II was out of the question. My fiancé would have left me for sure. So I bought the EOS R instead. Mirrorless is the future, right?

It was only when I started shooting film again this fall that I discovered the EOS-1.

While I’d shot plenty of film in the past and even worked in a university darkroom for a while, I’ve mostly shot range finders. The last film SLR I shot was my father’s Pentax ME Super.

The EOS-1 gave me the chance to see what a modern film camera had to offer.

It turns out EOS-1 is, to no one’s surprise, a whole lot like every other Canon camera ever made only it’s film you’re filling with frames and not a memory card.

Pulling the camera from the bubble wrap, the first thing I noticed about the EOS-1 was how little Canon’s bodies have changed in the last three decades. From across the room, the EOS-1 could easily be mistaken for a 5D classic, minus the mode dial.

The next thing that struck me was just how big and heavy it was. Even unloaded it’s an absolute brick of a camera. From the pictures in the eBay listing, I had expected it to be a fair bit smaller.

It was only after I’d loaded my first roll of film that I discovered the next surprise: just how much noise the camera makes when you crack off a frame. However, it wasn’t the mirror slap or the shutter that got me, so much as the deafening whirr of the film advance motor pulling the next frame into place.

Honestly, with the EOS-1 pressed to my eye, the whir of the motors were the only thing other than the lack of an LCD to remind me I was holding a film camera.

From the outside, the EOS-1 looks just like an EOS-1D that’s lost its grip. For the most part, everything is in the same place and works about as well. There are, however, some notable differences.

Unlike its modern equivalent, the EOS-1 features an aluminum chassis covered by a thick layer of black polycarbonate. The 1Dx, on the other hand, is constructed almost exclusively from light-weight yet durable magnesium alloy.

On the top of the camera you’ll find the mode control, autofocus and metering buttons alongside a TTL hot shoe, an illuminated LCD, the front control dial and shutter button.

Most of the camera’s settings can be changed by holding down one or two of these buttons while rotating the forward control dial. For example, if you wanted to change the camera’s autofocus mode from single shot to servo you’d hold down the AF button and turn the control dial until the LCD shows “AI Servo” in the top right.

The back of the EOS-1 should be familiar to anyone who’s shot Canon before. Here, you’ll find several switches and buttons alongside the rear control dial. The switch located directly under the viewfinder itself enables and disables the control dial, while the switch near the bottom is used to turn the camera on and off. At the upper right are the AE lock and exposure compensation buttons — though these are frequently remapped to perform other functions like back-button focus. And this being a film camera, there is a film rewind button located next to the power switch.

On the left side of the camera, you’ll find a flash sync port and door release, while on the right you’ll find a small door hiding four more buttons used to reset the camera, check the battery, change the drive mode to continuous shooting, or program custom buttons. Below this door is what I believe to be the control for the remote release.

Like many cameras from the late 80s and early 90s, the EOS-1 is equipped with an automatic winder that makes loading film quick and easy. This, however, can be a little disconcerting at first for anyone who hasn’t loaded a roll of 35mm in a while, but I’ve found mine to be quite reliable.

The EOS-1 isn’t without its quirks. The first and most obvious is its battery.

Unless you managed to get your EOS-1 with the optional battery grip, you might have to do some searching to find the 2CR5 lithium battery needed to power it up.

The good news is you can find these on Amazon for less than $10, but it’s definitely something to keep in mind when you’re placing your order.

The next quirk has to do with installing the battery. Instead of a battery door, you have to remove the entire front half of the grip to swap out the battery. Luckily, you shouldn’t have to do this often as 2CR5 batteries will easily last you 50 or more rolls.

Modern digital cameras are packed with autofocus points. My Canon EOS R has 5,655 phase-detection autofocus points. The EOS-1, on the other hand, boasts one — yes, that’s right one — cross-type focus point in the center of the frame.

The good news is in well-lit conditions, the EOS-1’s autofocus is quick and reliable, but don’t expect modern autofocus performance out of this camera. While it focuses brilliantly in high contrast situations, in poorly lit or low-contrast scenarios, the camera will hunt briefly before giving up altogether.

Canon claims the EOS-1’s autofocus system is accurate down to -1 EV, so it’s safe to say manual focus is going to be your friend in low light.

In AI Servo mode — what Canon calls its continuous autofocus mode — the camera does a respectable job keeping slow-moving subjects in focus, however, in anything but high-contrast lighting conditions the camera will hunt. And since you’re only working with a single autofocus point, keeping anything in focus while using AI Servo also means keeping it in the center of the frame; something that’s not always an easy task.

While we’re on the topic of autofocus, I want to talk about one of the best reasons to consider a vintage EOS camera: pretty much any EF lens ever made — with the exception of EF-S lenses — will work flawlessly regardless of whether the camera was made in 1987 or 2019.

That’s because Canon started over in the mid-80s, creating a new electronically controlled lens system for their move into the autofocus era. Rather than modifying their existing mount with an in-body screw drive as Nikon had a few years earlier, Canon chose to build the motors into the lenses. At the same time, they increased the size of their mount to enable brighter glass. The downside to all of this was that pretty much every Canon lens made prior to 1987 wouldn’t work on EOS cameras.

Coupled to my Canon EF 50mm F1.4 USM, I found the autofocus to be quite snappy. This shouldn’t come as a surprise considering the lens was first released a couple of years after the EOS-1. On my more modern EF 50mm F1.8 STM, the results were even better, with the lens swiftly and silently finding focus.

The EOS-1 was billed as a sports and wildlife camera, so I’ll mention its burst rate.

By itself, the EOS-1 was capable of shooting at a rather anemic 2.5 FPS. However, when paired with the optional Power Drive Booster E1 battery grip — sold together as the EOS-1 HS — the camera’s burst rate jumped to 5.5 FPS. While that might not be all that impressive today, you have to remember the EOS-1 was a film camera. At full rip, an EOS-1 HS could chew through a 36-exposure roll of film in less than 6.5 seconds. For this reason, it wasn’t uncommon to see sports photographers carting around two cameras at any given time.

While a cool bit of history, given the price of film and development today, you’re probably better off buying digital if you need anything more than one FPS. Assuming a roll of quality film costs you $11 and development runs you another $15, at 5.5 FPS that’s almost $4 a second. At that point, you’re better off feeding a slot machine, or you could just set your money on fire if that’s more your style.

The EOS-1 is one of the best SLRs ever made, but should you buy one?

Finding one in good, working condition can be a little tricky and will likely mean importing one from Japan. This can be a little dubious since, as with most international orders, returns can be more trouble than they’re worth.

The other thing to consider is lenses. Even Canon’s oldest EF lenses have held their value surprisingly well compared to those from Nikon or Minolta. If you don’t already have a bag full of EF glass, you might want to consider the slightly pricier Nikon F4. Older Nikon F-mount lenses can be had for a relative bargain compared to Canon EF lenses.

If all you’re after is a great autofocus film camera, there are tons of options out there, from Nikon, Canon, Minolta, and Pentax.

But if you really want an autofocus Canon, there are plenty of great options including the original EOS 650, the newer EOS-1N, the cult-favorite EOS-3, or the practically modern EOS-1V.

I should note that while newer models do offer some creature comforts like faster film winding or more autofocus points, they also tend to come at a price premium. So, if you’ve got a bunch of Canon EF glass and have to have the best of the best, by all means, get an EOS-1V. There is bound to be someone out there willing to lighten your wallet of $450 or more.

I’d rather have a camera with fewer features and more cash for film and lenses.

One of the great reasons to buy a vintage EOS camera is the community. There are hundreds if not thousands of EOS film devotees. Here are a few resources that you may find helpful. I’ll be adding more in the future. 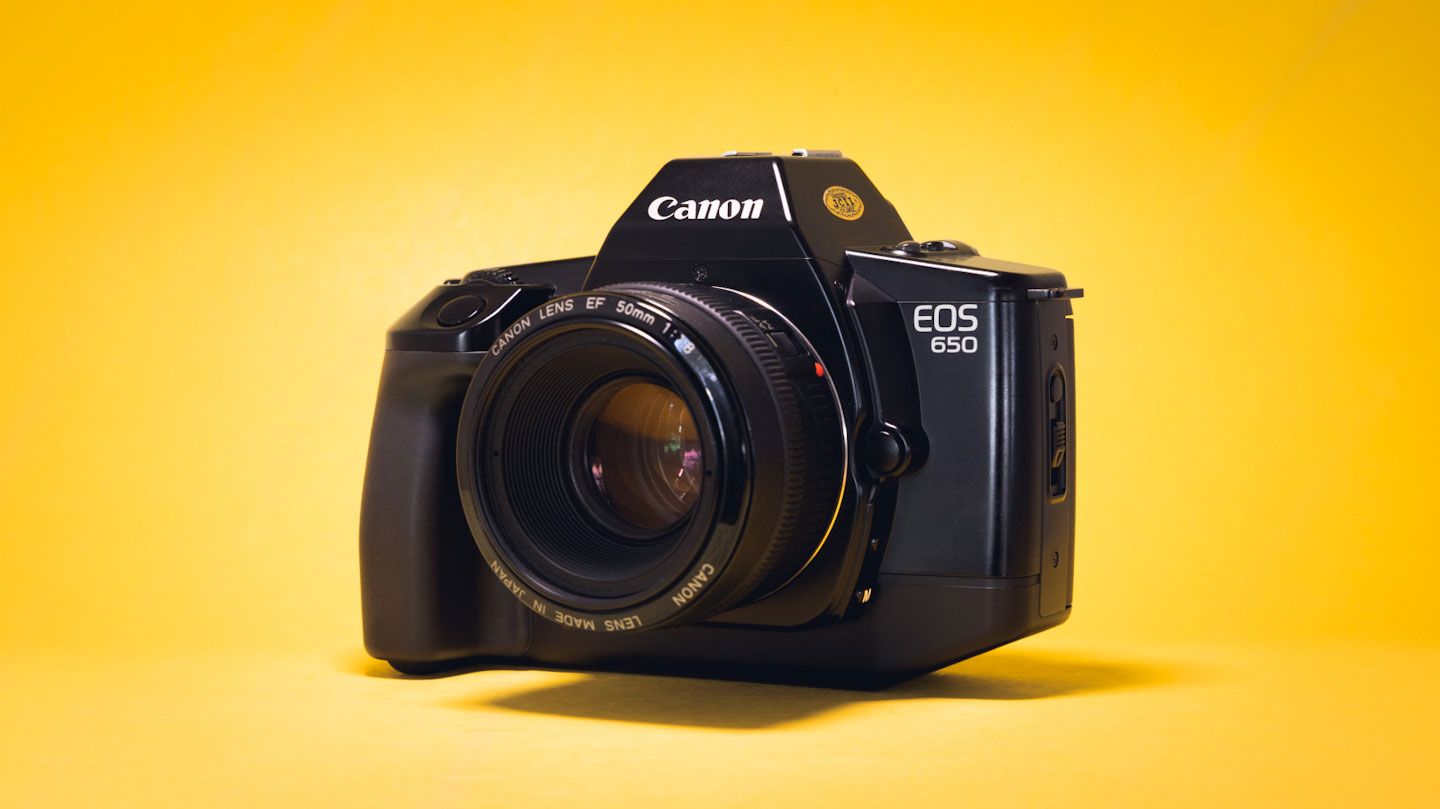 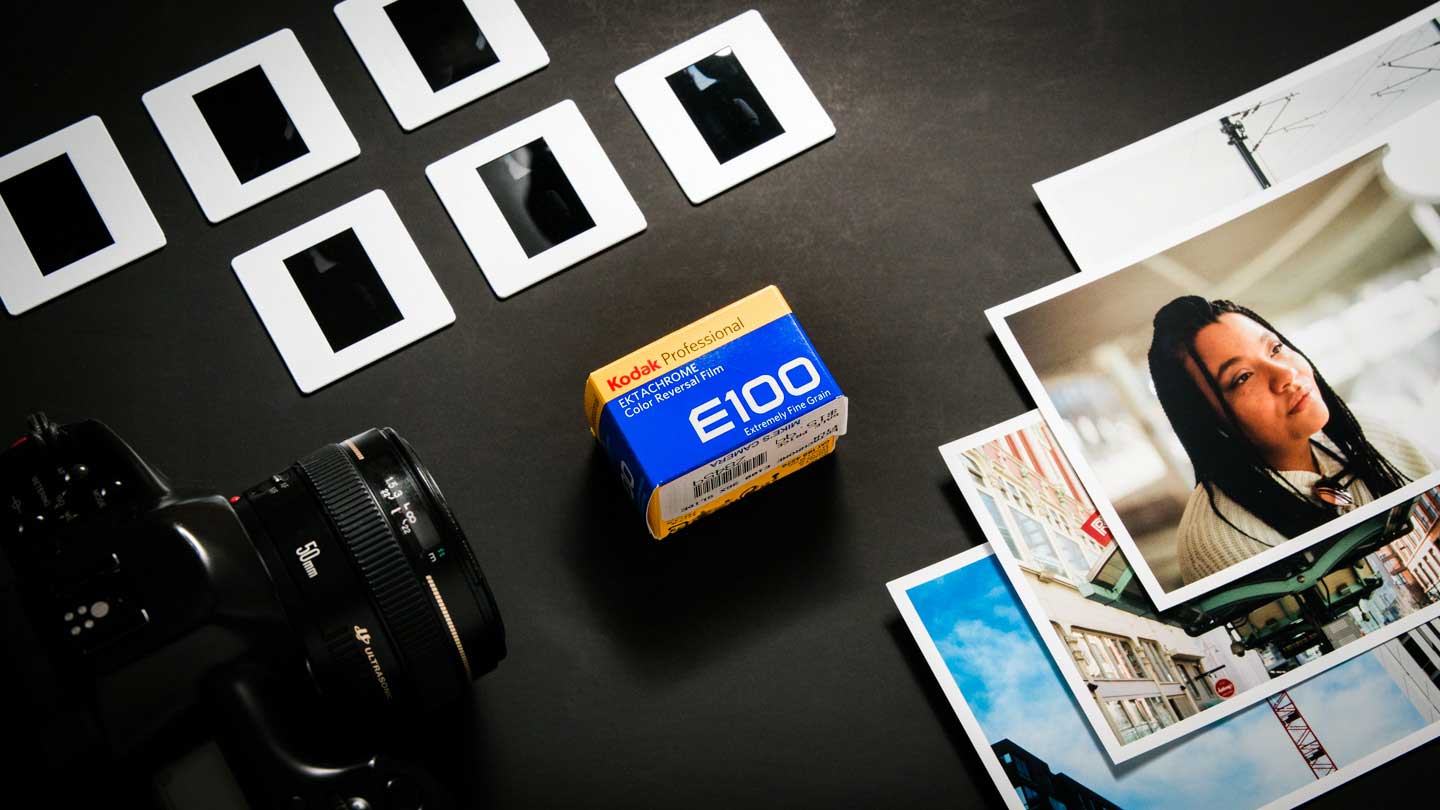 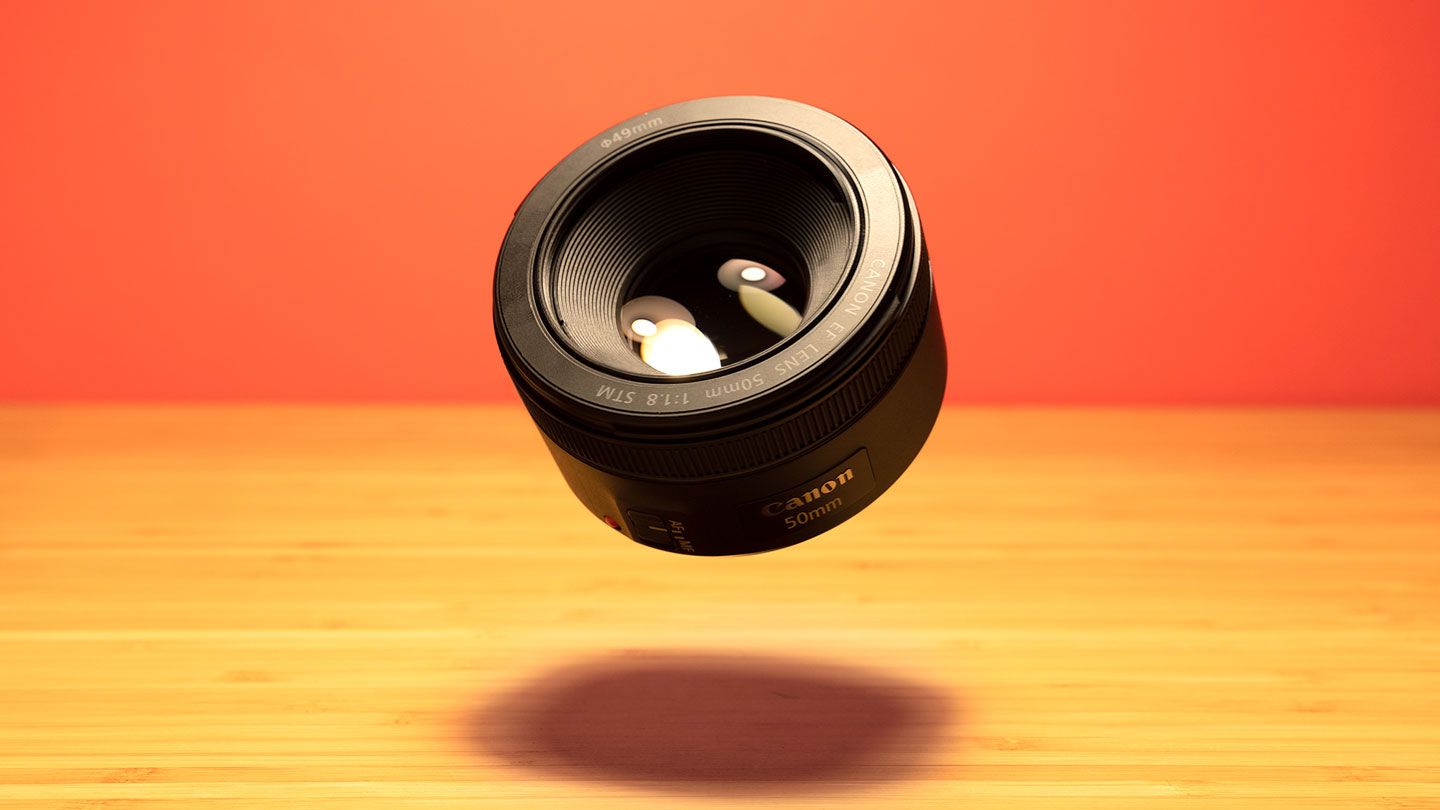